The National Reining Horse Association will host the NRHA High School Reining Championship during the 2016 NRHA Derby. Eight of the most talented high school riders will represent their association to compete for the ‘Slide of their Lives’: four riders from the 2015 NRHA Youth 14-18 Top Ten and four from the 2015 14-18 North American Affiliate Championship (NAAC) class. 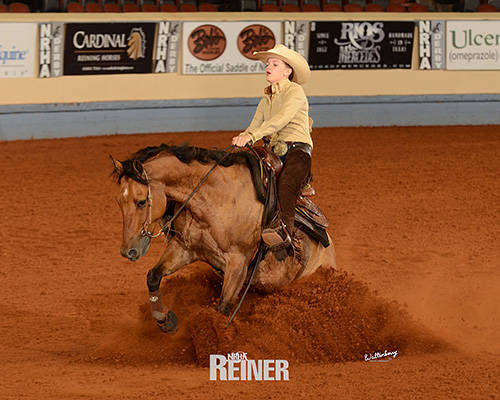 It’s well known how competitive the World Champion race is, resulting in a list of riders who are seasoned athletes and highly driven. The youth riders from the NRHA Youth 14-18 Top Ten are Terri June Granger, Emily Morris, Emily Sitzman and Claire Streeter.

The four riders from the 2015 Youth 14-18 NAAC class have already secured a championship after working all of the 2015 show season to qualify for the 2015 NAAC class. These riders are Annabeth Payne, Kenleigh Wells, Kaitlyn Baker and McKenzie Duncan.

These eight high school riders will draw a horse at random donated by supporters, and only have five minutes of warm-up time before they compete. Watch the live runs in real time on nrhaderby.com thanks to Equine Promotions, official videographer of the 2016 NRHA Derby.

The ultimate high school catch ride competition will be on July 2, 2016 in the Jim Norick Arena in Oklahoma City, Okla., at 8:30 a.m. For more information on the competition or to have your horse participate, please contact Sara Jensen at Sjensen@nrha.com.

To watch all the live feeds during the 2016 NRHA Derby, check out nrhaderby.com and visit NRHA on Facebook and Twitter. Complete results for the NRHA Derby and ancillary classes can also be found at nrhaderby.com once the Derby starts.