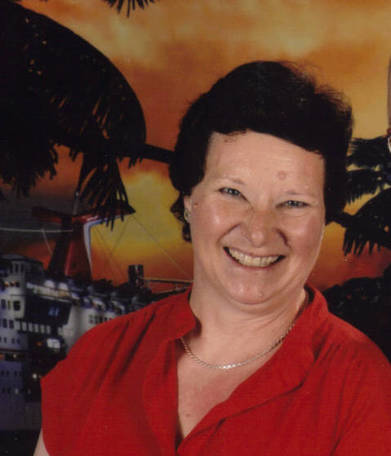 My full name is Clara  Ruth  Somnitz,  I share my first name with my mother.

Where were you born and raised:

I grew up in Northwest Colorado on my parents’ ranch of 1600 acres. We lived 21 miles from town and 5 miles from the nearest neighbor. We had many acres of wheat and alfalfa hay as well as sheep, beef and dairy cattle, chickens and sometimes pigs. As a youth I was active in 4-H for 10 years showing lambs at the County Fair. I worked for the local vet the last 2 years of High School.

Where do you live and with who:

I now live in Geneva, Ohio with my husband of 32 years, Gary, and my son, Jason. We built our home and first barn in 1989, then continued to expand as we kept needing more space. We added a barn for storing hay and equipment in 1983, another in 2000 for more stalls, and finally a indoor arena in 2005.

During my years in school I participated fully in the band and choir. As a member of Northwest Colorado’s Finest (band) I played for President Ford and got to shake his hand. I also traveled to California to march at Disneyland. Attending Colorado State University I continued with the band where I got to march at Mile High Stadium and was invited to play with the Ft. Collins Symphony Orchestra for one concert.

Please describe what you do for a living:

I took in my first boarder the summer of 1992 and have continued a small boarding operation since that time. I have kept horses of several different breeds—some for only a month or two but others several years.

I have been a 4-H Advisor for 10 years and my interest in Hippology is from Jason getting involved with the 4-H Contest. I coached the Hippology and Judging Teams from 2007 to 2012. I was very pleased with the accomplishments of the youth placing many times in the top 5, Junior State Champions in Judging, and Senior State Champions in Hippology. The Hippology Team earned the chance to participate in the Congress and Eastern 4-H Round-Up Contests.

I have been involved with Dusty Boots Riding Club serving as Vice President the past 5 years. I have also been a Director and Trustee several years serving on the Show, Banquet, Awards, and Rules Committees.

I also have been a NOQHA director for 3 years serving on the Scholarship, Circuit Awards, Cookout, and Queen Committees.

Please discuss your current and past horses along with show highlights:

My first involvement with equines was at age 3 when mom & dad bought a burro for each of their kids—we had a lot of fun with them. There were always a few horses around the ranch—some more broke than others. I was given my own mare for my 14th birthday and 7 months later she delivered a sorrel colt—no one would ever admit where he came from but he always tried to please and was loved by many before and after coming to Ohio. I never knew until the last time my dad visited how worried he was about my riding him in the parade as a 4 year old when I was 1st Attendant to the Fair Queen. After moving to Ohio I became interested in showing and started with Virginia Slim Deluxe and her foal, Shades of Deluxe. Then I prepared and showed 3 other weanlings in the local Open Futurity. I now am usually seen around shows as Jason’s groom—it works well for both of us.  Jason and Hoosier Gunslinger were the 2014 High Point Amateur Gelding in the Nation.

Do you have a hobby other than horses?

My other hobby is being a spectator for Nascar and World of Outlaws Auto Racing. The thunder of 4 wide sprint cars is really exciting!!!

What is something you have done that no one would guess you’ve done?

It is very unusual these days but I made my own wedding dress. I started with shimmer satin to make the dress, then put in a lining, and finished with a full length train.